We Are Being Lied To! Here Is How… Spiro

Dr Ben Tapper said CV19 numbers have been over inflated. Dr Tapper does not wear a mask and is not impressed by the attitude he gets from mask wearers when he goes out in public.

Covid is a data-driven operation, but suppose the data are wrong?

Donald Trump is leaving WHO in 12mths, and partnering with Gates’ Global Vaccine Programme and Gates’ are working with WHO anyway. So nothing much has changed really, except perhaps the cut in profits for investors. Both main political leaders are being sneaky and don’t want to clearly spell out what their policies will be with regard to vaccinations (manditory or not) before the elections because they don’t want to risk losing votes. So they dish out half truths to their brainwashed followers who don’t even ask because they assume it will go in their favour. Next to Bill Gates, politicians appear to be the biggest drug pushers on the planet both on and off the streets when taking Big Pharma, Afghanistan and the USA legalised cannabis into account. Even though there’s no guarantee of them honouring their promises, voters need to make Biden and Trump spell out clearly what their party policies are before the election. The Politicians need to be held accountable.

How many times do taxpayers and consumers have to pay for a drug before they finally get it? Often times it turns out to be a dud, and a waste of time and money. Buying stock after knowing it is a failing drug begs the question, why buy more? WHO complains about all stocks being bought out in advance by one buyer & prevents regular users from getting a repeat prescription. It also stops supply to people with other medical complaints that the drug works well for. This happened when the drug hydroxychloroquine, used in the treatment of malaria got bought out to treat Covid-19. Another problem was created because there was none left to treat malaria patients with.

DISCLAIMER: THE NIGHTINGALE FILES does not accept liability for material created by other Authors. Journalists or Video Creators.

WARNING – Any person and/or institution and/or Agent and/or Agency of any governmental structure including but not limited to the United States Federal Government also using or monitoring/using this website or any of its associated websites, you DO NOT have my permission to utilise any of my profile information nor any of the content contained herein including, but not limited to my photos, and…/or the comments made about my photos or any other “picture” art posted on my profile. You are hereby notified that you are strictly prohibited from disclosing, copying, distributing, disseminating, or taking any other action against me with regard to this profile and the contents herein. The foregoing prohibitions also apply to your employee, agent, student or any personnel under your direction or control the contents of this profile are private and legally privileged and confidential information, and the violation of my personal privacy is punishable by law. UCC 1-103 1-308 ALL RIGHTS RESERVED WITHOUT PREJUDICE

Following the BBC report in advance dated July 11 that Maxwell has the covid-19 we also have news which techniquely should have been posted first. IMO she will exit via covid-19 or whatever else with the love of her life Epstein and go away together to some Island Paradise or Israel with their new makovers and live happilly ever after. Then business as usual. Nothing changed.

Finally confirmed. Right from the beginning it was known that the wet market didnt even sell bats. Western zionist media has also avoided revealing hundreds of bats were taken from caves north of Wuhan by US and given rectal swabs before this latest virus version came about.

Can you blame people from wondering if the virus is Biowarfare or a psyop while the narrative keeps changing? Anyone who questions the narrative is called a conspiracy theorist or nut job. From where I’m looking, anybody who doesn’t question the narrative poses a problem to humanity.

People like yes mask. no mask Fauci got paid $8.3 Billion to to tell us a story that keeps changing e.g. it came from bats, then camels and pangolins as well as the changing yes sir, no sir, three bottles full of Hydroxychloroquine sir story. Dr Fauci may as well be Trump’s ventroquilist dummy. If I was a cartoonist I would draw Trump’s hand up Faucis ar** while Fauci addresses the media and public. You don’t get paid 8.3 billion to say what YOU want Fauci. This whole thing smacks of the old boy’s network.

I have much empathy for Dr Judy Mikovits in her quest to reveal how viruses and retroviruses come about. Dr Mikovits as well as many other doctors who spoke up about vaccines were booted from the system. Why would that be, considering their truth is nearly 100% similar to each others’? Its because truth does not make money or control populations. It doesn’t increase the wealth and power of the elite old boys network who thrive on creating chaos. Without the chaos the world would mostly be peaceful and free of their Hegalian dialectical corruption. They wouldn’t be so rich and powerful.

Dr Mikovits did agree on Trump’s suggestion to take Hydroxychloroquine in combination with natural medicine. Perhaps she was right or perhaps she was wrong or perhaps it really does work when taken with another natural remedy. Dr Mikovits should be given the opportunity to explain this. Unfortunately she now has the OBN on her case and they will stop at nothing to discredit her without giving her a chance to explain.. The Aljazeera News Network have already had at least 2 news sessions discrediting Dr Mikovits.

Dr Mikovits, for her own good, needs to keep politicians out of her story. They don’t support her now, but you can guarantee if she succeds in her quest for truth, they will only be too happy to make claim to her fame. Republicans and Democrats are one and the same as far as the the OBN is concerned, but hey, thats their secret. Their loyalties lie first to the brotherhood before anyone else. Talking about locking up your daughters – wives need to lock up their husbands.

Donald Trump is treated like an innocent vulnerable victim by his followers – just like a baby who needs full on protection. Hello – he did’t come down in the last shower. He has a background in money laundering Casinos. He loves money above all else except maybe Ivanka and will start agressive propaganda based wars to rob other countries of their land, gold, oil and resources e.g. Venezuela and Palestine who he wants to give to his friend Bibi – the Rothschild puppet. Yemen is another victim of Trump terrorism. The people in his cabinet represent what he has major investments in – Big Pharma, big oil and big banks. He is also invested in the tobacco industry and Monsanto and others. No wonder he doesnt want people to see his tax return. Forget about blind faith and think more along the lines of blind trusts.

Dr Fauci Allegedly Stole Aids Research and passed it off as his own.

Is This Julian Assange Leaving the Ecuador Embassy London on or about 22 July 2018 posing as a furniture remover?

Pictures were taken from the following Video …

Does this furniture remover at Ecuador Embassy look like of Julian Assange?

A black armband/ bracelet can be seen on his hand as he boards the van.

Julian wearing a similar black bracelet during his arrest in 2019

Wikileaks Exposed as a Zionist Cover Up Operation

Exposed: How the Rothschilds Groomed Assange as a “Bankster-Hitman”

DISCLAIMER: THE NIGHTINGALE FILES does not accept liability for material created by other Authors. Journalists or Video Creators.

WARNING – Any person and/or institution and/or Agent and/or Agency of any governmental structure including but not limited to the United States Federal Government also using or monitoring/using this website or any of its associated websites, you DO NOT have my permission to utilise any of my profile information nor any of the content contained herein including, but not limited to my photos, and…/or the comments made about my photos or any other “picture” art posted on my profile. You are hereby notified that you are strictly prohibited from disclosing, copying, distributing, disseminating, or taking any other action against me with regard to this profile and the contents herein. The foregoing prohibitions also apply to your employee, agent, student or any personnel under your direction or control the contents of this profile are private and legally privileged and confidential information, and the violation of my personal privacy is punishable by law. UCC 1-103 1-308 ALL RIGHTS RESERVED WITHOUT PREJUDICE

Ukraine is another Syria. This is not the first time but one of many times Ukrainians have had everything stolen from under them. Their country is loaded with resources – e.g. Oil, Gas, Titanium, wheat and sunflower oil. The people there are very poor and don’t have enough money to buy what is necessary to drill and mine the resources. Zelensky is super rich loaded to the hilt with x times of everything including $millions and he doesn’t appear to have been very helpful. He is doing deals with the zio cons whose missiles and explosions are driving the people out of their country. While the people are being herded out, the Rothschilds & Co preditors are ready and waiting to move in for the grab .

Extract from a NZ Doctor’s letter accusing the NZ Medical Council of having “Blood on their Hands” and being Silent about Vax Deaths.

CIA evokes the fear-then-relief response employed by interrogators in the Reid Technique, creating real problems so they can drive us to false solutions.

OPERATION GLADIO A is a well documented example, where NATO maintained a secret army in Europe, who pretended to be terrorists like the Red Brigades during the Years of Lead.

The Red Army Faction (RAF) or Baader-Meinhof Gang was supported not only by CIA, through Herbert Marcuse, but also through the East German STASI–showing the Cold War to be a sham.

Click Here To Learn about the German Terrorists & Marcuse the Loser!

Deep state provocateurs would blow things up in counter-terrorism actions, and blame the attacks on anti-government groups, to provide an excuse for government crack-downs that deprived people of their rights.

The English engaged in similar tactics in Ireland, as a British Army regiment worked with the Glenanne…

The Most Revolutionary Act 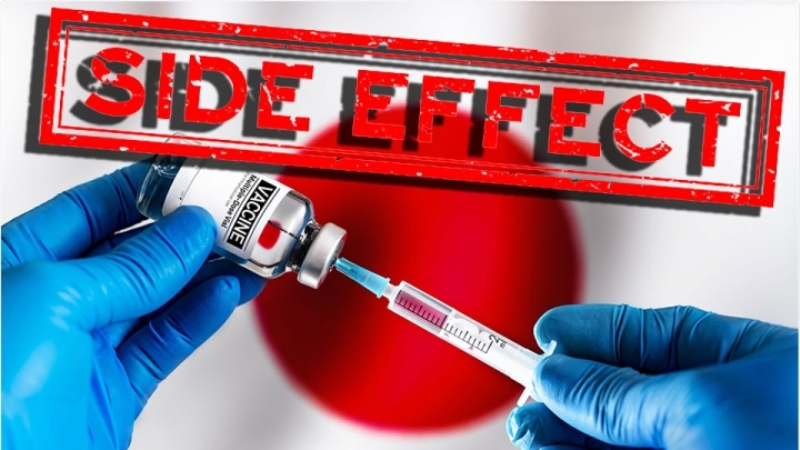 First, Japan’s health ministry acknowledged the growing rate of heart inflammation among the vaccinated population. Then Japan’s public and private sectors were alerted to the fact and forbidden to discriminate against those who refuse the COVID vaccine. Furthermore, Japan has made it clear that “informed consent” is required to receive the vaccine. Japan now insists the vaccine labels warn of dangerous potential side effects such as myocarditis.

NHK-Japan (Japan Broadcasting Corporation): Japan’s health ministry has listed inflammation of the heart muscle and of the outer lining of the heart in younger males as possible serious side effects of the Moderna and Pfizer COVID vaccines.